A review of Adjacentland from the Hamilton Review of Books

A recent interview with Open Book

Donna Bailey Nurse talking to Shelagh Rogers about The Perfect Pledge on the Next Chapter.

If you liked V.S. Naipaul’s A House for Mr Biswas, you’ll love… 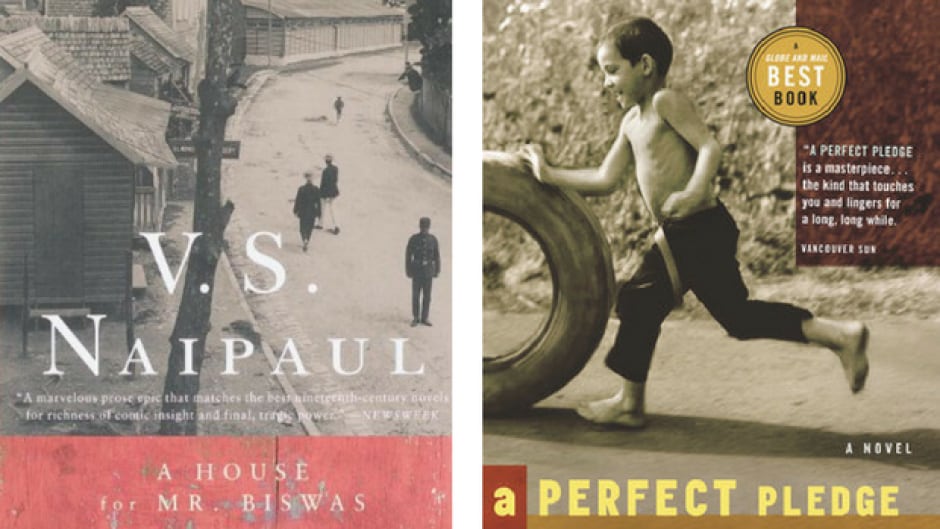 Nobel Prize-winning author V.S. Naipaul was born in Trinidad, and he is best known for his novels set in that country, including his breakthrough 1961 novel A House for Mr. Biswas. Below, The Next Chapter columnist Donna Bailey Nurse suggests a Canadian novel that she thinks would be a great fit for fans of Naipaul’s book.

A House For Mr. Biswas is really a fictionalization of the life of Naipaul’s father. It is so warm and loving, but also deeply insightful of the society from which he comes. We begin with a baby being born, and he’s called Mr. Biswas from birth. He’s born into a very poor family of labourers, and what the book is really about is how a person born into such a lowly situation tries to make something of themselves. So throughout his life, he just wants to make a mark, and one of the main ways he wants to make a mark is by having a house. In those days of indentured servitude, so many people went through life without birth certificates or death certificates. He wants a monument to himself — he wants something that says “I was here.”

Rabindranath Maharaj’s A Perfect Pledge is a wonderful book that I don’t think we hear enough about. Both books begin with a birth — A Perfect Pledge begins with the birth of Geevan, who’s called Jeeves, a fourth child for his aging father. His family also doesn’t have a lot. It feels like Maharaj’s book moves us forward a generation in that the family does have a house, so we’re not talking about a house. We’re in a new generation, and he’s thinking about independence. What this character is thinking about is, what is the meaning of independence? He thinks everybody should be in charge of their own life, and that moves us forward in the Caribbean story.

Donna Bailey Nurse’s comments have been edited and condensed.

From CBC: Ten of the funniest Canadian books

When Samuel is 17, he loses his mother and moves in with his estranged father who happens to live in Toronto, not Trinidad, where Samuel grew up. With the aid of the superheroes he adores from his comic books, he learns to adapt to his new life in this sparkling novel that’s as funny as it is moving.

Interview on ‘One on One’ (in 2 parts) with Vernon Ramesar

Trinidad and Tobago Newsday (March 21) – “There are times when you choose, and there are times when life chooses you. For acclaimed Trinidadian author Rabindranath Maharaj, his path as a writer was really a little of both…” Read the article “Robin Maharaj to read tomorrow at Campus Week” here.

Trinidad Guardian (March 17) – “The idea of returning to T&T for a time to work and share knowledge as an established writer came to Rabindranath Maharaj when he took part in last year’s Bocas Lit Fest in Port-of-Spain…” Read the full article, “Rabindranath Maharaj Stepping Back, Drawing Closer”, here.

Above: NORTHWORDS trailer from filmCAN on Vimeo.

“North Words”, from CBC’s “The Next Chapter” – Listen as Robin and other authors read from works inspired by their 2011 trip with Shelagh Rogers to Torngat Mountains National Park in Northern Labrador.

Interview Podcast at University of the West Indies (September 29) – Listen to Robin discuss his writing with Ryan Durgasingh.

The Picture of Nobody – Robin talks about writing for Good Reads.

Maple Ridge Public Library, BC – In 2010 Robin visited the West Coast and talked about The Picture of Nobody.

Toronto Public Library (October 15) – Listen to Robin discuss the origins of The Amazing Absorbing Boy and what its main character Samuel discovers about the city. Play video below or click here.

The Labradorian (September 12) – Read “Every Ca

nadian Should See This”, about Robin’s trip to the North with Shelagh Rogers, Noah Richler, Alyssa York, Joseph Boyden, and Sarah Leavitt. (Click photo at right to go to article.)

Ajax Public Library “An Evening with Rabindranath Maharaj”, July 19, 2011, a celebration of his Trillium Book Award win (in two parts, below):

Harbourfront Centre Reading in two parts (from February 2010) below:


BookLounge (above) (February 16) – On BookLounge Robin “discusses comics, setting a novel in Canada, and finding a voice on the GO Train.” If video does not appear above, click this link.

CBC Radio (March 5) – On “The Next Chapter” with Shelagh Rogers, Robin discusses The Amazing Absorbing Boy.

Toronto Star (February 2) – Profile by Vit Wagner. Read “From Inside the City, Giving Voice to an Outsider – Author’s years living in Toronto helped with novel about immigrant“.

Essay in Globe and Mail – “When I was about ten or so, a new neighbour moved into the empty house opposite my parents’ in Tableland, a village in South Trinidad. This neighbour, a man who seemed close to seven feet tall invited my uncle and me to his place one evening…”  Read “A world of Marvel“, an essay from Robin, describing how The Amazing Absorbing Boy began.

CNQ Canadian Notes & Queries (Issue 76, 2009) – “I was born in 1955 in George Village, Tableland, a small agricultural district between two very old towns: Princes Town, given its name from a visit by Prince George, and Rio Claro, which I will always associate with ancient, white-washed concrete churches and noisy wooden rum shops. Most of the villagers were cane and cocoa farmers, and as a boy, I would gaze from the front yard at the bisons and donkeys on the road walking at the same slow pace, day after day….” Read the entire feature interview with Robin, as conducted by John Metcalf, in print, or online here.

Newsday (February, 2008) – “There’s a kind of solitariness to Canada for most immigrants, especially for people in my profession, and that to me is one of the real benefits of writing – the fact that you don’t have that kind of social interaction, that kind of liming that you have in Trinidad.” Read the complete interview here.

Toronto Star – “Three immigrant authors; three experiences of a new place called Toronto. These writers will share memories of their first days in the city…” includes “Afraid of the ‘almosts'” by Rabindranath Maharaj, alongside fellow authors Shyam Selvadurai and Goran Simic.

In My Own Words (September, 2007) – “My most recent novel, A Perfect Pledge, began with a solitary image of an old man toiling away in a canefield shadowed by a windmill.” Read article here.

The Writer’s Cafe.ca – Author is interviewed and reads from A Perfect Pledge. To listen, click here.

Toronto Star (June, 2006) – “The Melting Pot by the Lake; friendly shores – In our sixth piece on a Greater Toronto place written by a local author, Rabindranath Maharaj writes of the Ajax waterfront, and how his parents helped him see it anew friendly shores”.

“. . . IR: You’ve often said that leaving Trinidad allowed you to write. Given the years that you’ve since lived in Canada, how have your perceptions of both places altered, and did these manifest at all in the ideas that compelled you to write A Perfect Pledge?

“RM: Leaving Trinidad allowed me to view writing as a profession with its own rules and obligations, different from what I had imagined. In Trinidad, everyone has some grand fantasy or another, so I needed to be certain that my desire to write was not just another half-crazy idea. I was fortunate, I believe, that I moved to Fredericton rather than, say, Toronto because I was completely cut off from everything familiar. The landscape could not be ignored. I began to contrast everything new with all I had known. And everything I’ve written since then has been coloured by this contrast . . .”  To read the complete interview at Books in Canada, click the image above, or click here for a pdf version.

Vancouver Sun (August, 2005) – “Memories of Colour and Chaos – Interview 1: Trinidad looks different to Rabindranath Maharaj now that he’s lived in Canada for more than a decade…”; with Rebecca Wigod.

Globe and Mail – “Trinidad on the Double-Double – Reading about a fully formed Caribbean universe of bull carts, mango trees, pumpkin-vine soups and turmeric-past rubs, it’s hard to imagine [A] Perfect Pledge was conjured up in the coffee shops of Ajax”; with John Allemang.

Engaging The Word (Summer, 2005) – Robin speaks with James O’Hearn about A Perfect Pledge.

READ magazine (Fall, 2003) Vol.3 Issue 2 – “The Art of the Short Story” – The author, along with writers Timothy Taylor and Shaena Lambert, discusses the craft of short story writing. Read the article here.