Introduced by award-winning journalist and radio personality Shelagh Rogers, NORTHWORDS is a collection of stories written by acclaimed Canadian authors as they experienced one of Canada’s most awe-inspiring northern national parks, Torngat Mountains National Park, the country’s newest national park, and a place steeped in geological and human history. The cross-platform project, which includes a documentary film that follows the authors as they explored the harsh and stunning terrain, had adventures, and created these new works, adds to the continuing story of the North. The stories explore the idea of the North, and what happens when the country’s best writers tackle its most overwhelmingly beautiful places. 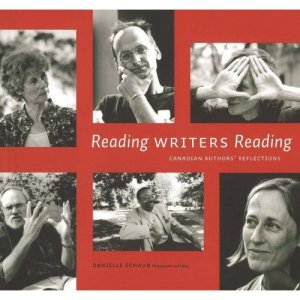 “A treasure trove for students of Can Lit, the volume presents 164 Canadian writers from fiction writer Caroline Adderson [and Rabindranath Maharaj] to poet Jan Zwicky each with a full-page portrait facing a one-page chunk of rumination on reading and writing. The labour of love, both the photography and editing, is the work of Canadian Danielle Schaub, who teaches Canuck fiction and autobiography in Israel.  — Toronto Star

“Edited by acclaimed novelist Lynn Coady, this anthology of new Atlantic Canadian fiction is named for the Victory Meat Market in downtown Fredricton, a place that features prominently in Rabindranath Maharaj’s fine story, “Bitches on All Sides.” This is the story of Ramjohn, the ultimate outsider—a West Indian immigrant and lapsed Muslim who finds himself in a society where being ‘from away’ is considered only a step or two above having been in prison.”
—Booklounge.ca

Below, excerpt. © Reprinted by permission. All rights reserved.
“The Tea House on the Mountain” by Rabindranath Maharaj

“Maybe it’s a good idea for us to keep a few dreams of a house that
we shall live in later, always later, so much later . . . —Gaston Bachelard, The Poetics of Space

Sometimes I would read of travel writers miraculously stumbling upon a remote gem, cached away from everything that had made them uncomfortable and itchy. I was usually skeptical of these miniature paradises and particularly of their descriptions: frozen in time, lush and verdant, wreathed in mist. I felt that these writers needed to isolate some redemptive nugget from their montage of irritation. But then I discovered just such a spot. In Trinidad, of all places…”